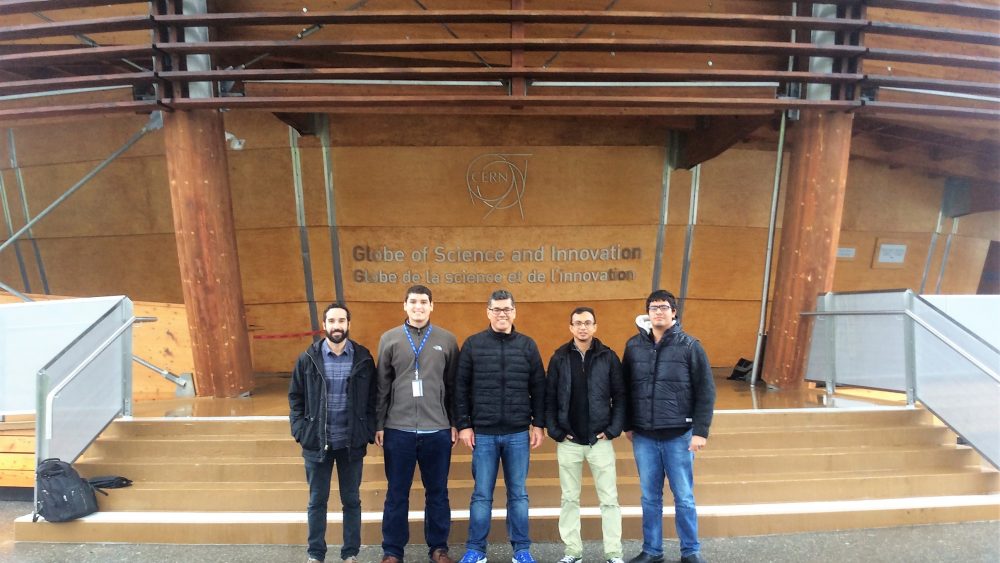 ALICE project of the Large Hadron Collider (LHC), belonging to the European Organization for Nuclear Research (CERN), in Switzerland, counts on contributions from young master and doctorate and undergraduate students.

He pointed out that the involvement of younger people is a strategy to integrate as much young and talented people as possible to large international projects, like ALICE.

«I’m convinced that talent is everywhere and to give this opportunity to youngsters so they can integrate and take responsibility in the project. There are undergraduate youths, we will involve them since now, with very punctual tasks», he said.

The ALICE detector (A Large Ion Collider Experiment) was designed, built and operated for the collision of heavy ions, Mexicans participated, among them people from Sinaloa such as León Monzón. The objective of the experiment was to study the phenomena produced when thousands of particles collisions reproduce the conditions of the universe first moments.

Among the main results of the ALICE project is the discovery of the liquid universe, previously thought to be gaseous. According to León Monzón, some students offer solutions to problems in this research.

«In meetings about possible projects for 2022, there is a topic that requires of the detectors we have installed to see a process of the Higgs boson. It will be the first time that the creation of the Higgs boson with similar particles, more exotic, is seen, in the processes we call diffractive. There is where students, like Solangel, are involved», he said.

Arturo Fernández Jaramillo is 30 years old, he is doing the doctorate at the Polytechnic University of Sinaloa (Upsin, Universidad Politécnica de Sinaloa). He is originally from Mazatlán and collaborates in the electronic part. «It is the first time I come to the experiment, but I have been in contact with PhD León for a year. I’m in charge of some electronic cards and to review designs to see if it is possible to improve them, because they acquire different phenomena within the experiment», he pointed out.

Rafael Ángel Narcio Laveaga is from Mazatlán and is 21 years old, he is an undergraduate in the Upsin. He is participating in the data acquirement of some ALICE detectors. «It is necessary that young people get involved in these areas of research», he commented.

Luis Fernando Torres Avitia was born in Culiacán, he is 21 years old and is a student in UAS. «I’m participating in the electronic part, in the analysis of some acquisition cards of data to see if they can be improved. We also support people in charge of making simulations of the experiment», he said.

Solangel Rojas Torres is 28 years old, he is from Mazatlán and is a doctorate student in the Faculty of Physical-Mathematical Sciences of UAS. He has now been collaborating for two years and a half with CERN.

«He is practically in every activity. His main task is about the performance of the detector that UAS built in collaboration with Cinvestav. For the future, we plan that Solangel do a yearlong internship for the analysis of 2016 data. This is the level of responsibility that dictate the level of participation of different institutions», he announced.

Another student involved in the project is Juan Carlos Cabanillas Noris, from the Faculty of Informatics of UAS, who develops software for the control of the detectors.

Due to the contributions realized, the Sinaloa team managed to extend their participation until the year 2022, reason why the researcher considers necessary, in the state and country, to bet for the frontier sciences. «We have a plan and we have talked about it with the UAS and with colleagues from other institutions: Mexico requires the accelerators technology . If we want to aspire to high-level science, of last frontier, we need to be involved with frontier projects. We cannot aspire to be in the knowledge frontier without creating in the country projects with frontier science», he said.

An accelerator for Sinaloa

León Monzón said that the UAS aims to the creation of accelerator technology, that is why more high-level researchers are required. He announced that soon will be analysed the possibility of creating an accelerator for Sinaloa, for the benefit of agriculture. «Initially it is about having a proton accelerator, a lineal accelerator», he commented.